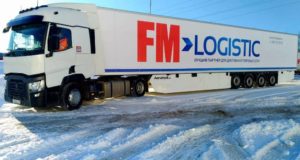 The Russian start-up has adopted aerodynamic equipment to reduce fuel consumption and CO 2 emissions. The first destination after Russia is France, with FM Logistic.
From the United States, the technology arrives in Europe via Russia. Aerotruck, a start-up launched last year by Russian and American entrepreneurs, proposes to increase the aerodynamics of trucks with “skirts” that, when placed between the wheels, reduce fuel consumption and CO2 emissions.

“The transport and logistics sector is very conservative. But new regulations are shaking up the status quo! “says Almaz Ayupov, director of Aerotruck, whose technology, which is being patented in Europe, is based on American experience. Its “skirts”, envelopes made of composite materials, limit turbulence under the truck and reduce fuel consumption by 2 to 5%. “Although this technology has been widely used in the United States since 2013, it is still almost non-existent on European roads. For a vehicle that travels 500 kilometres a day, it nevertheless provides annual savings of 2,440 euros,” says Almaz Ayupov, who guarantees his customers a return on investment in less than a year. The reduction in CO2 emissions is estimated at 6 to 7 tonnes per truck per year.

France, a key territory
After initial trials in Russia, with some 2 million kilometres of tests, notably on the X5 fleet, Aerotruck, the Russian leader in distribution, wants to tackle Europe. Before Germany and Poland, the first destination is France. The company, which is announcing forthcoming trials with Gefco and negotiations with the main players in the French transport sector, is already conducting pilots with FM Logistic. In recent years, the French specialist in logistics resources for large-scale distribution has been developing a series of cooperative ventures with Russian start-ups.

The Moscow subsidiary is starting to test Aerotruck’s “skirts” on a first truck between Moscow and St Petersburg. “We are going to check the effectiveness of its technology in practice. The group’s general strategy is to reduce our carbon footprint”, insists Alexeï Bormine, director of operations for the Russian subsidiary of FM Logistic. There is certainly no shortage of competition, with the ‘skirts’ of Schmitz Cargobull and Wabco. Aerotruck, based in Estonia for commercial reasons, in the EU, promises lower prices and simpler technology. The equipment can be installed on almost any truck and does not require welding or drilling.